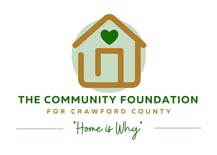 The Community Foundation for Crawford County recently held its annual meeting and celebration event at Cranberry Hills in New Washington. Opening comments were made by Lisa Workman, President of the Foundation, to a crowd of about 100. Attendees listened to video presentations by Dan Pallotta and Phil Buchanan, who offered varying versions as to how non-profit organizations should conduct their business.

Board Treasurer and CPA, Matt Orians, discussed qualified charitable distributions (QCDs) from an IRA. These gifts can exclude up to $100,000 of QCDs from the donor’s gross income each year. The donor must be 70-1/2 or older in order to be eligible to make QCDs. The Foundation encourages donors to always seek tax advice from their tax advisor.

Dr. Pete Maynard, Chairman of the Board, recognized the service of outgoing Board members, Brad Starkey (pictured to the left) and Annie Carter (pictured below). Board members are allowed to serve two consecutive three-year terms, and then must be off the Board for at least one year before serving again. Other Board members whose terms had expired but were not present were Janel Hord and Justin McMullen.

The evening concluded with much applause and celebration, as the Foundation had contributed over $611,000 to the community in 2018. Their number of funds held also grew from 73 to 82, while the amount awarded in scholarships increased to $124,100, up from $66,000 the prior year.

Besides appetizers, drinks and socializing, audience members also had an opportunity to watch the release of tagged monarch butterflies. The butterflies were part of a student project at Buckeye Central’s outdoor learning lab, another initiative partly funded by the Foundation’s Crawford Impact Fund.

The Foundation’s mission is to support collaborative, impactful and philanthropic leadership that provides quality and lasting investments in our community, now and for generations to come.